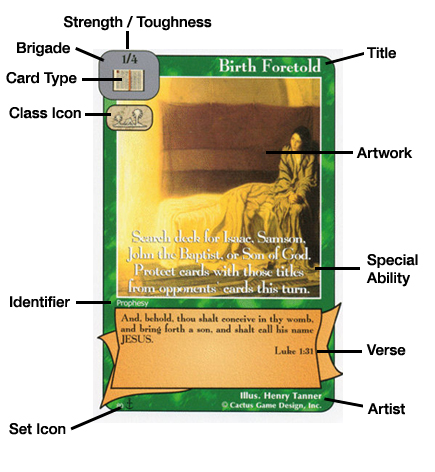 The icon in the upper left corner of the card indicates the card type. Different card types have different functions in Redemption.

The different card types are:

The icon box in the upper left corner of the card typically bears a background color. This color represents the card's brigade. Characters and Enhancements tend to fall into different brigades that have different themes and different strategic options. Generally, an Enhancement (or a Covenant or Curse played in battle) must be of a brigade color that matches a character in battle. Sites also have brigade colors to indicate the ways in which they grant or deny access to a Lost Soul.

There are currently eight good brigades in Redemption:

There are currently seven evil brigades in Redemption:

Some cards feature an second icon below the brigade box. This is a Class Icon. There are three types of classes a card can have:

This area lists specific details about the card, such as if it is based on prophecy, connected with demons, or what nation a character was from.

The text printed over the illustration on the card is usually a Special Ability, a special power that generally is carried out when the card is activated, or when the conditions required to use it are satisfied. Special abilities are the heart of Redemption gameplay.

A Scripture reference is usually printed in a scroll-shaped box beneath the illustration. Scripture provides a historical and/or thematic context for the card and its characteristics.

This icon shows what set the card is from. These were not used until the Women of the Bible expansion.

Retrieved from "https://redemption.fandom.com/wiki/Anatomy_of_a_Card?oldid=15908"
Community content is available under CC-BY-SA unless otherwise noted.