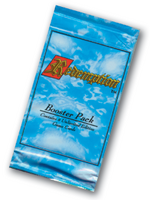 The Limited Expansion was the first full expansion of booster packs in Redemption. This set was released in July of 1995 in conjunction with the Limited Starter Decks, with the initial launch of the game at Origins.

The Limited Expansion contained a fairly broad distribution of characters and ideas from Biblical literature, and was not focused on any particular theme. Nearly half the cards had no special ability at all, and most of the ones that did were Rare. Many of the abilities were simple ignores and heal cards. Abilities of particular interest include:

Approximately 8.5 million cards were printed in the Limited Expansion, or 1.1 million booster packs, or 24,000 display boxes.

Retrieved from "https://redemption.fandom.com/wiki/Limited_Expansion?oldid=15883"
Community content is available under CC-BY-SA unless otherwise noted.