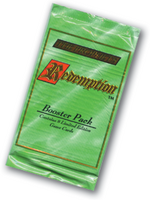 The Prophets Expansion is the second full expansion of booster packs in Redemption. This set was released in June of 1996.

The Prophets expansion contained a number of characters and Enhancements related to the books of prophecy in the Old Testament. Similar to the Limited Expansion and Unlimited Expansion, less than half the cards in this set had a special ability of any sort, and most of those were Rare. Abilities of particular interest included:

Retrieved from "https://redemption.fandom.com/wiki/Prophets_Expansion?oldid=15887"
Community content is available under CC-BY-SA unless otherwise noted.